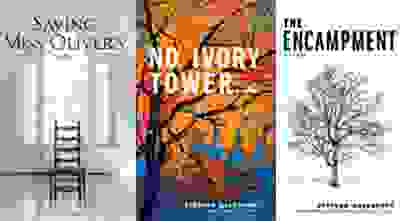 "Some are called to work in schools.

Some are called to write.  Davenport is called to both."

Welcome to the Saga of Miss Oliver’s School for Girls

Miss Oliver’s School for Girls, a boarding school on the edge of the Connecticut River, is a fiercely feminist place, a world apart, where anything can happen.

Book One, Saving Miss Oliver’s: a young, male school administrator naively accepts the headship of the school after the dismissal of the beloved headmistress who had been in office for thirty-five years. The best way to be loyal to her is to be disloyal to him.

Book Two, No Ivory Tower: The feisty young headmistress fights back against an angry right wing talk show host who tries to bring the school down.  Read more

Book Three, The Encampment: Everything changes for the headmistress, her daughter and her daughter’s roommate when a homeless Iraq war vet, made dangerous by post-traumatic stress disorder, comes into their lives.